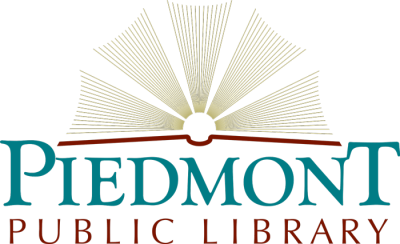 Our History
Annual community surveys consistently showed that a library was one of the top priorities for the citizens of the growing Piedmont community. Although the city did not have funds to construct a library, Mayor John Bickerstaff and City Manager Jim Richardson were supportive of the idea and encouraged Parks and Recreations committee chair Marcie Moore to pursue it.

In the fall of 2000, Marcie, city secretary Heather Flynn, Mrs. John Bickerstaff (Arita), and community member Lisa Gigstad attended “On Stage Oklahoma” at Rose State College. There they met Ann Weisman, Executive Director of the Assembly of Community Arts Councils of Oklahoma. In January 2001, Ann came to Piedmont to meet the fledgling group and pointed them in the right direction to become a not-for-profit group. City employee Betty Thompson suggested the name for the organization.

Our first board meeting was held November 2000. The mission statement adopted was: “To serve people of all ages in the Piedmont community; to encourage development of a library and contribute to its ongoing mission; To facilitate a variety of cultural events n our community.”

Our immediate goals were: “To establish a public Library in the city of Piedmont; to provide support of the Piedmont Public Library through the administration, daily operation and programming; to promote education, recreation, and cultural opportunities.”

The Board met quarterly in 2001. Over the course of the next year generous donations were received to make construction possible. In April of 2001, the city established the Piedmont Library Trust Authority to administer.

P.L.A.C.E.S. (Piedmont Library Friends) sponsored a ground-breaking ceremony for the library on May 4, 2002. During the course of that year, and the years following, we sponsored numerous cultural events and fund-raisers. In June 2003, Glenna Schnell, was appointed as the first City Librarian.

In September of 2003, the Piedmont Public Library held its grand opening in conjunction with the community’s Founder’s Day. Today, the collection has grown to more than 16,000 items, and serves more than 3,500 card holders.